What is “placement type” when creating a campaign?

How can I optimize my campaigns to maximize revenue?

Why do I have many bootups but no impressions?

Why can’t I add a new campaign?

Please note that you cannot add a new publishing campaign until your app has been approved for publishing. Learn about publisher app review process ▶ ▲ Back to top

Why are my apps greyed out while creating a publishing campaign?

Please note that until your app is enabled for publishing, you will not be able to select it in the Select app(s) section of your publishing campaign. It can take a couple of days to have your app checked. If you don’t hear back from us within a week, you can contact us under Publishing -> I didn’t get a response to my Publisher App Review Request. Learn about publisher app review process ▶ ▲ Back to top

Why is my revenue low even though I have lots of impressions?

Why are my impressions low? How do I get more traffic?

Why are there earning discrepancies between App and Campaign Analytics when I use Banners?

How do I limit the number of times I show ads to my players?

Go to your campaign’s advanced settings and change the maximum ads shown per user.

How do I control the audio in my ads?

The template from Chartboost ads already includes a MUTE button on video ads which gives your players the power to control the audio on their end. This button is usually on the top right section of your ads. If you wish to manually set the audio behaviour (muted or unmuted) you can do this by using Chartboost SDK method setMuted. Please note this option is only available to iOS developers on SDK 7.3.1 or higher. See SDK Configuration Methods for iOS here. ▲ Back to top

What is fill rate?

Fill rate is the ratio of how many requested ads were actually delivered.

How do I see my earnings?

Go to the Publishing Overview in your dashboard. ▲ Back to top

How does your system decide which ads to serve in my app?

After our system retrieves a pool of advertising campaigns that match your publishing campaign targeting conditions, it serves your game an ad from the best-performing campaign, as defined by eCPM. In the Chartboost network, eCPM is a combination of an advertising campaign’s install rate (IR), clickthrough rate (CTR), and bid, which reflects the overall competitiveness of the campaign. ▲ Back to top

Can you estimate how many clicks or installs my app will deliver with a certain bid floor?

Because our network is dynamic, with new developers join every day, it’s difficult to predict. That said, we can work with you to optimize your campaigns, and you can use your account’s reporting tools to identify trends over time. ▲ Back to top

Why am I not making money even though users are clicking on my ads?

Before your publishing campaign starts delivering clicks or installs at higher volumes, you may notice that your campaign analytics show some number of clicks, but no revenue. This is completely normal: Because a large majority of Chartboost advertisers bid for installs – not clicks – your earnings will likely remain low until your campaigns start delivering more installs. From the campaign analytics page, you can see a report that breaks down your earnings by games you helped advertise. Just select the publishing campaign(s) in question, group by app, and refresh the table – you’ll get a TSV download (note that the file will have a .csv extension) with the information in the Money Earned column (and remember that values there will be 30% lower than the advertiser’s actual bid, to account for our portion of the revenue). Also note the difference between All Installs and Installs Delivered: ▲ Back to top

What is eCPM? How does it affect my publishing performance?

Chartboost does not support incentivized clicks or installs. For more information, refer to our Terms and Conditions. ▲ Back to top

How can I show more impressions from low-priority campaigns?

If you have multiple campaigns running in a single game, you can use the Campaign Logic section to adjust each campaign’s priority:

This setting controls the order in which impressions will be served when more than one campaign is running in a given app. If you find that Game X never seems to deliver impressions from lower-priority campaigns, start by checking the list of campaigns it’s publishing; you can get to this list by switching to the game with the app switcher, expanding Monetization in the left-side nav bar, then clicking Publishing Campaigns:

In the screenshot above, the campaign will not serve impressions at the Default location. For more in-depth information about priorities, see our FAQ here. ▲ Back to top

Why don’t all the converted installs that I deliver earn me money?

You may notice that your game delivers installs for some advertised apps without resulting in any earned revenue. This can happen for a few different reasons: For a clearer picture of revenue earned through conversions, you can click the Device Installs button on the Campaign Analytics page to download a report that shows the cost_value of each install:

How do I know which games to filter from my campaigns?

We highly recommend letting Chartboost decide which apps appear in your campaign. Follow these instructions only if you need to filter apps for business reasons (e.g. competing or similar apps).
Here’s how to figure out which apps to filter using Microsoft Excel: 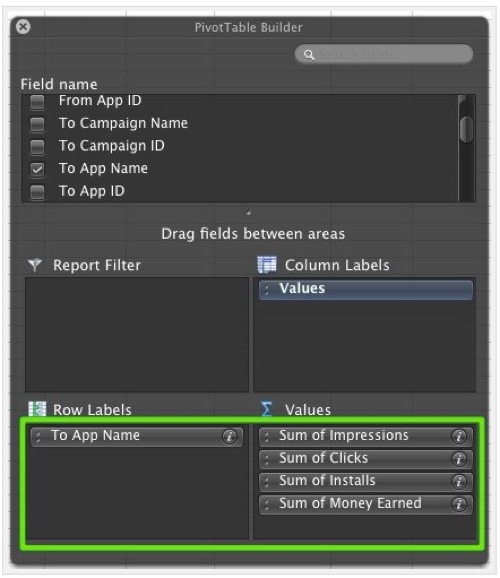 We recommend that you do not exceed 1,500 apps filtered in a single campaign.
Any changes made to the dashboard may take up to 30 minutes to go live.
If you filter out an app and a user has already cached an ad for that app on their device, that ad can still be shown for up to 24 hours.

What if I can’t find the app I want to filter?

Let us know! Please include the name and ID of the app you need removed. ▲ Back to top

How long should I keep filters applied?

Because things change often in the network, we recommend removing filters every few weeks, reassessing which games offer low eCPMs, then excluding that updated list. You may be surprised at the difference between the two groups! ▲ Back to top